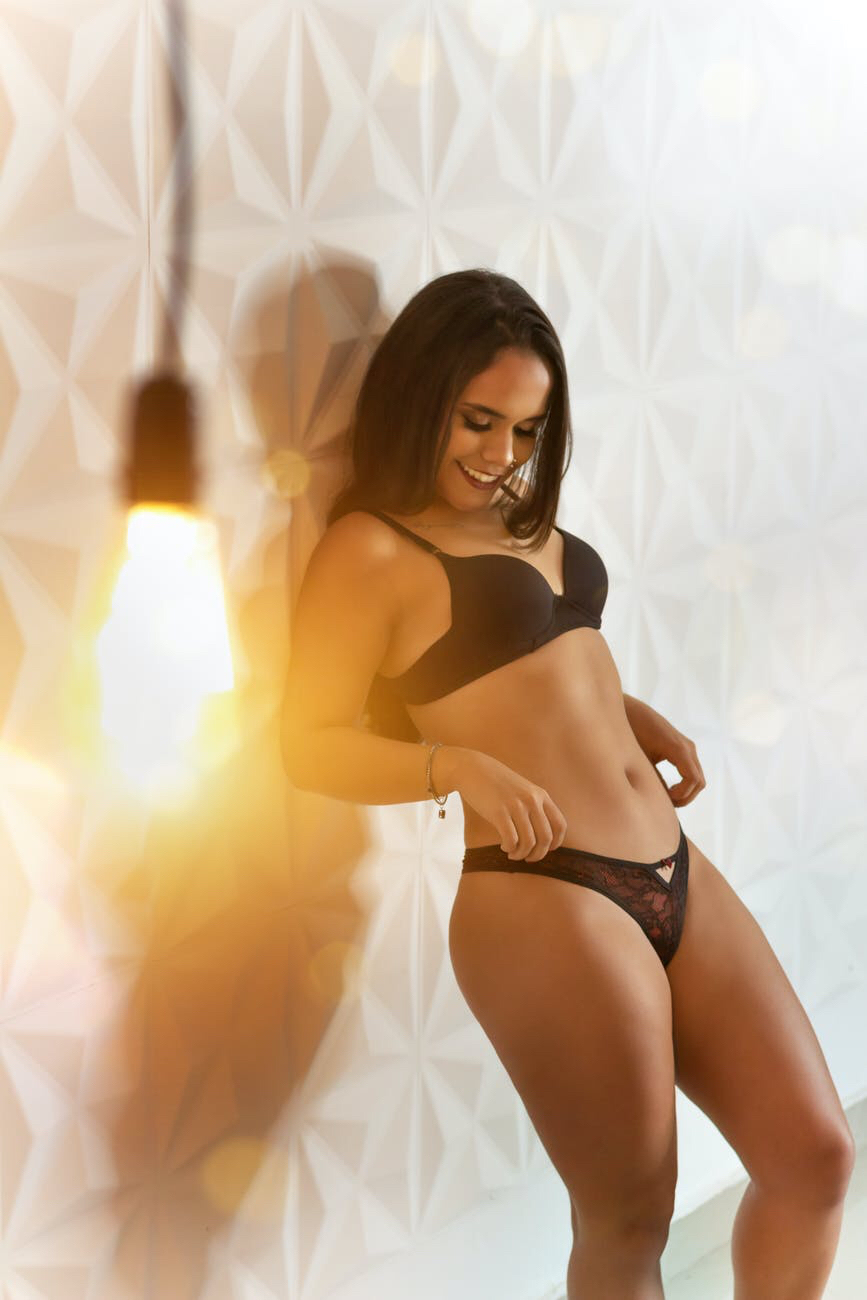 She looked exactly as Thomas had described her in the ad. She was petite. Really small, actually. She had some curves. Her ass was nice and firm, and she stuck it out a bit. One could notice it when she walked. She had some pride in it, clearly. She wiggled it as she walked into the room that night. She wanted to excite and make a good appearance. Thomas loved it when she did that.

“This is Eve,” Thomas said. His voice was calm and steady.

They all were in a hotel that Thomas had gone through the trouble of booking. He was wearing some jeans and a button-up shirt. Eve had on a very tiny skirt and a bra that barely covered her nipples. She had her brunette hair done up in an elaborate finger wave. She had expensive pearls. Her makeup had been done professionally. She was done up as much as possible for the evening. Thomas wanted to make sure she felt pretty.

The others in the room were Kevin, Anthony, and Jose. They had been picked out meticulously from the ad that Thomas put out. He made sure to vet all three, having them verify their authenticity and their availability for the event planned. All three were in their mid-twenties. Kevin was black, with a goatee and big smile. Anthony was blond with a stone expression on his face. Jose was Latino, his head shaved and shining against the lighting in the room. All three were nude. Jose played with his half-hard member as Eve walked in. He was loud as he commented on her.

“This is your wife or something? She’s a little baddie…”

“Not my wife,” Thomas said. “I keep her around because she does as she’s told. Don’t you, Eve?”

“Even if I call her little slut, she’ll answer. Won’t you, little slut?”

“Yes sir. I am a little slut. Thank you for paying attention to me.”

The three men on the bed began to stir. There was some doubt between the three of them of what was actually going to happen that night. The ad had stated that the three of them would be able to do anything they wanted with her. After about a week of calls and pictures being exchanged it looked as if nothing was ever going to transpire. That skepticism was now dashed with Eve in front of them.

“Little slut, beg these men to fuck you. I want to see them excited.”

“Oh, please fuck me. I really love how nice all of your cocks look. He’s been showing me pictures all week of you three. I can’t stop thinking about you all inside of me. I want you all in every single hole of mine.”

Kevin was the first to move. He had been answering these ads for a year now, and this was the most insane thing he had ever seen. Usually it was some guy’s wife, and after he would end up fucking her in front of him or while he watched on Facetime he would feel a bit bummed. While it was always enjoyable, it always felt like it lacked the excitement that he felt when he would first read the post. This time wasn’t like that. He stepped forward and looked down at Eve, licking his lips before placing his cock at her mouth.

She took it instantly. Her eyelids drooped and she began to moan over him. She got lost in it. She loved sucking cock. It was a reward for her with Thomas, so feeling Kevin inside her mouth was like a different treat.

Anthony and Jose came then. They both began to undress her while she continued to her work. They were fascinated. Thomas had been when he first met her as well. That was why he put so much work into training her. She was perfect. She was molded to exactly how he wanted, and when he told her that he wanted her to be the perfect little slut for him, she promised him she would be exactly that.

It took a long time to get here. Endless days were filled with Thomas training her. He would begin using her as soon as he would wake up and not stop until it was time for them both to sleep.

Now these other men had found her. They had not thought it possible to find a woman like this, but maybe this was what they were searching for online. A woman who would let them take her as if she was property, as if Thomas was handing them a spare wrench that he had in his garage. The moment Thomas brought her into the room was the moment they exchanged her. She showed that by the way she took care of all of them.

She had two cocks in her fists and one in her mouth at all times. She moved from each of them. Each one wasn’t left alone. She switched between the three of them masterfully, moving at a pace that almost made Anthony shoot his load when she stuck him in her mouth. He had never seen such ferocity when it came to giving head. She was wonderful, dirty, and enthralled. Her enthusiasm was what excited him the most.

Jose seemed inspired by her too. He was jumping for joy on the inside. It was rare finding a little slut like this out in the wild. He never expected this when he got a hold of Thomas, but now that she was in front of the three of them, he was going to enjoy it as much as possible.

“Look at this fucking slut,” he whispered. He took his rod and began to beat it on her face while she sucked off Kevin. A small trickle of pre-cum drizzled out at that moment, and when he flicked his cock onto her face a line of it spread across her nose. She pulled Kevin out of her mouth and began to slap him against her skin as well. After seeing this, Anthony joined in as well, and the three of them let their stiff cocks rain down on her face while she took in the feeling of all three of them.

“That’s right, sweetheart, take it all in,” Thomas said.

“Get that fucking ass in the air,” Jose said.

He kneeled behind her and grabbed her when she followed his orders. He let his hands grip her cheeks and he squeezed them, pulling them apart before letting them crash together when he let them go. He was breathing heavily then, his excitement kept growing the more he handled her tiny body.

He entered her and fucked her hard. She had Kevin in her mouth and she began to choke on him from the force coming from behind. She didn’t stop. She turned her head to the left and let him fall out of her throat, but as soon as she caught her breath Anthony was in her mouth, pushing forward and taking Kevin’s place.

“That’s right, treat her just like that. She’s just a set of holes for you guys now. She just gives into it.”

Eve felt so proud and loved right then. Thomas said something that made her feel big and whole. She let out a moan from around the dick in her mouth and she opened up her legs and she let herself go. She lost herself for the next couple of minutes. The boys passed her around, using her pussy, mouth, and hands. She closed her eyes, and when she opened them she was in Anthony’s arms. He had her off her feet and carried her to the bed. They hung her head off the side of it and entered her from both ends. Jose started in her pussy while Anthony had first dibs on her mouth. He and Kevin traded her back and forth, easing into her with ease now. Thomas looked on with the hardest cock he had ever had. It was pressing tight against his pants, to the point where it was getting uncomfortable.

Eve felt a shuffling along with a coldness in the crack of her ass. She realized that one of them was putting lube on her asshole. She let out a soft moan and peaked her backside up in the air. Jose let out a cheer and Thomas undid his jeans to free himself.

“Look at her,” Jose was dangling his cock at her asshole while Kevin was in her pussy and Anthony in her mouth. “Just look at her. She wants another dick in her more than anything.”

Jose wasn’t gentle or slow. He could feel her stretch around him and he saw her body react. She stiffened and then tried to relax but she couldn’t. She had only taken multiple toys before, and while that had its intense moments it felt nothing like this.

“Take it, sweetheart. Take it.”

Thomas looked on and he felt amazed by it. He knew he could supply her with something she needed but nothing like this. He saw her come. He had seen it tons of times before, but never like this. She spit out and screamed at the top of her lungs. Anthony pushed himself back in and she held him there before he bucked. She rode out her orgasm but the men paid her no mind at all. She felt alone while being surrounded by them, but she also felt at the top of the world. Her body felt like a cat’s tongue, extra sensitive, and responsive to each of them now.

“Sweetheart, come and relieve me.”

Eve perked up when she heard Thomas call for her. He was sitting on a chair in the corner of the room with his cock in his hand. She crawled to him and when she got to him she sucked him off. She looked lovely to him. She worked hard on him, savoring having her beloved Thomas in her mouth until she felt his legs stiffen and her mouth begin to fill. He brushed her hair back lovingly as he finished inside of her. She looked up at him with her bright brown eyes and he felt his heart warm.

They thanked the men and told them they would keep in touch. The three of them got dressed and left the couple there in the room.

He picked her up and carried her to the tub. He filled it and wiped her down. He washed her and loved her. He told her she was beautiful. He told her he cherished her. She beamed and glowed. She hurt and was sore, but she felt loved. She felt affection like never before. After he dried her off he carried her to the bed. They fell asleep in each other’s arms, his lips pressed against her forehead and the smell of shampoo filling his nostrils until he felt her drift off and then he did as well.